There’s a roadside tea stall (cha er dokan) near my house. There are two more identical tea stalls right beside it. And yet more, many, many more strewn carelessly, almost strategically, all around Calcutta. Kolkata, rather. They usually open early in the morning, around 6 am, or even before that. Big yellow taxis, newspaper-wallas on bicycles and cha er dokans. Familiar, comforting sights that Kolkata mornings greet you with.

Tea is a lot of things for a lot of people.

It’s a cheap and instant source of energy for taxi and truck drivers whose days start at ungodly hours. It’s a lazy Bengali’s object of late afternoon indulgence “ei, ek cup cha de toh!”. It’s a perfunctory offering to guests who come over at any odd hour at your place. Good tea-making skills are a positive way of impressing a prospective mother in law. It’s a source of inspiration for writers and poets who can mull over a cup for hours at end for the next great inspiration.

But more than anything else, a cup of tea is a wonderful conversation starter. That’s why tea-stalls are so popular outside college campuses and workplaces. It goes beyond a pot bubbling with a super sweet, milky, hot beverage. It’s an adda spot. What is adda, you ask? Well, according to Wikipedia:

“…is a form of intellectual exchange among members, who were originally of the same socio-economic strata, but the process has democratized in modern times. It is most popular among the youths belonging to the so-called “middle-class intelligentsia”. Although many Kolkatans boast of the city being the birthplace of adda culture, Satyajit Ray (in his film Agantuk) traces back the origin of the tradition to regular intellectual dialogues prevalent in Ancient Greece at the time of Socrates or Plato. Adda is a prominent leisurely activity in India and Bangladesh.”

But to me, it is the very essence of being a Bengali. Be it banal commentaries on the insignificant to cannot-be-missed-gossip to heated debates on the existing socio-economic and political state of Bengal and beyond, adda is all-important to us argumentative, intellectual folk. We swear by it. After all, we have a mind of our own. And an opinion on everything, of course. And usually, a tea-stall becomes the hotbed of artistic outbursts and matchless creativity. From Tagore to Ghatak, Madhuri Dixit to Mayakovsky, science, art and aesthetics, everything is touched upon. Oh, and politics. And Corruption. Nostalgia and recollections are other favourite topics, but usually among older people. It is at the very core of communication and has survived social networking. With style.

I often like going to tea-stalls for a solitary cup of tea. And a biscuit or two from those glass jars filled with crumbling, sweet goodness. So, the other day I happened to eavesdrop on a group of old gentlemen gathered for their evening adda session.

They sat remembering before-times with affection. “It was so good, back in the day…” they concluded unanimously, in a way old people usually remember the past as being continuously better than the present [loud tea-sipping noises ensued].

Everything was cheaper. Everyone was better- better behaved, better looking, better everything. Things were simpler. People were less greedy. “You could walk down the road covered in gold from head to toe and still feel safe!” [heads nodding in agreement] “This neighbourhood you see? It was blissful! Quiet! Almost like paradise, so clean it was!” [mutters and sighs and grunts of approval] “Aj kal toh shobbai bidesh chole jacche…ei toh shedin amar nati America chole gelo…” (These days, everyone’s going abroad…just the other day my grandson left for America!) [a moment of silence, some order another cup of tea] “Ekhane theke hobe tai ba ki? Ja din kal poreche…” (What’s the point staying here anyway?) Then one of them broke into a fit of cough. The vagaries of old age.

I usually like smoking while having my tea. I sat, fidgeting with a packet of cigarettes. To light or not to light. Offending the fragile sensibilities of a  group of grandfatherly men is something that I did not really want. They are not approving of young ladies smoking. A young man smoking is fine though. I don’t mind. I am fond of old people, having lost my grandparents when I was too young to really know what their absence meant. So I finished my tea, smiled at the old man sitting next to me and offered him a matchbox for him to light his smoke. Then I left. 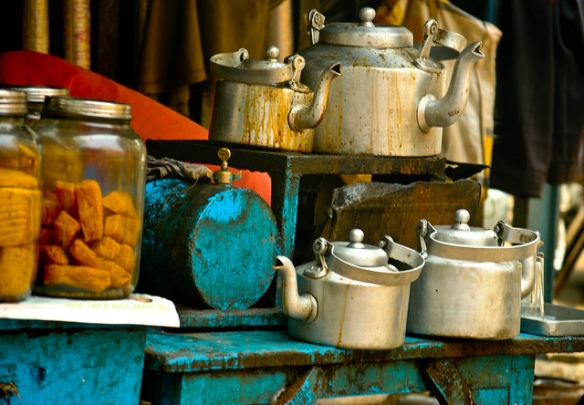 “Time for you and time for me,
And time yet for a hundred indecisions,
And for a hundred visions and revisions,
Before the taking of a toast and tea.”